Obscuro uses a novel decentralised round-based consensus protocol based on a fair lottery and synchronisation with the L1, designed explicitly for L2 rollups, called Proof Of Block Inclusion (POBI). It solves, among others, the fair leader election problem, which is a fundamental issue that all decentralised rollup solutions have to address. POBI is inspired by Proof Of Elapsed Time.

The high level goals of the POBI protocol are:

To achieve fairness, the POBI protocol states that the TEE can generate one random nonce each round, and the winner of a round is the Aggregator whose TEE generates the lowest random number from the group. The TEEs generate these numbers independently and then gossip them. The Aggregators who do not win the round, similar to L1 miners, respect this decision because it is rational to do based on the incentive mechanism. If they choose to not respect the protocol, they are free to submit a losing rollup to the L1, which is ignored by all compliant Aggregators, meaning such an Aggregator has to pay L1 gas and not get any useful reward.

The second goal is achieved by linking the random nonce generation, which terminates a round, to the Merkle proof of inclusion of the parent rollup (which exists as a transaction in the L1 transaction Patricia trie) in an L1 block. This property is what gives the name of the protocol. This means that an Aggregator can obtain a signed rollup from the TEE only if it can show the rollup is based on a published rollup in a prior L1 block. Furthermore, this feature links the creation of L2 rollup to an L1 block, thus synchronising their cadence.

A party wishing to increase its chances of winning rounds must register multiple Aggregators and pay the stake for each. The value of the stake needs to be calculated in such a way as to achieve a right decentralisation and practicality balance.

It is straightforward for all the other Aggregators to verify which rollup is the winner by comparing the nonces and checking that the rollup signature is from an approved Aggregator.

Note that the L1 Management Contract is not checking the nonces of the submitted rollups, but it checks that the block inclusion proof is valid. The L1 contract rejects rollups generated using a proof of inclusion that is not an ancestor of the current block.

A further issue to solve is to ensure that the host cannot repeatedly submit the proof to the TEE to try to get a lower nonce, explained here.

Note that by introducing the requirement for proof of inclusion in the L1, the cadence of publishing the rollups to the block times is synchronised. Also, note that the hash of the L1 block used to prove to the TEE that the previous rollup was published is added to the current rollup such that the Management Contract and the other Aggregators know whether this rollup was generated correctly.

The following diagram depicts this sequence: 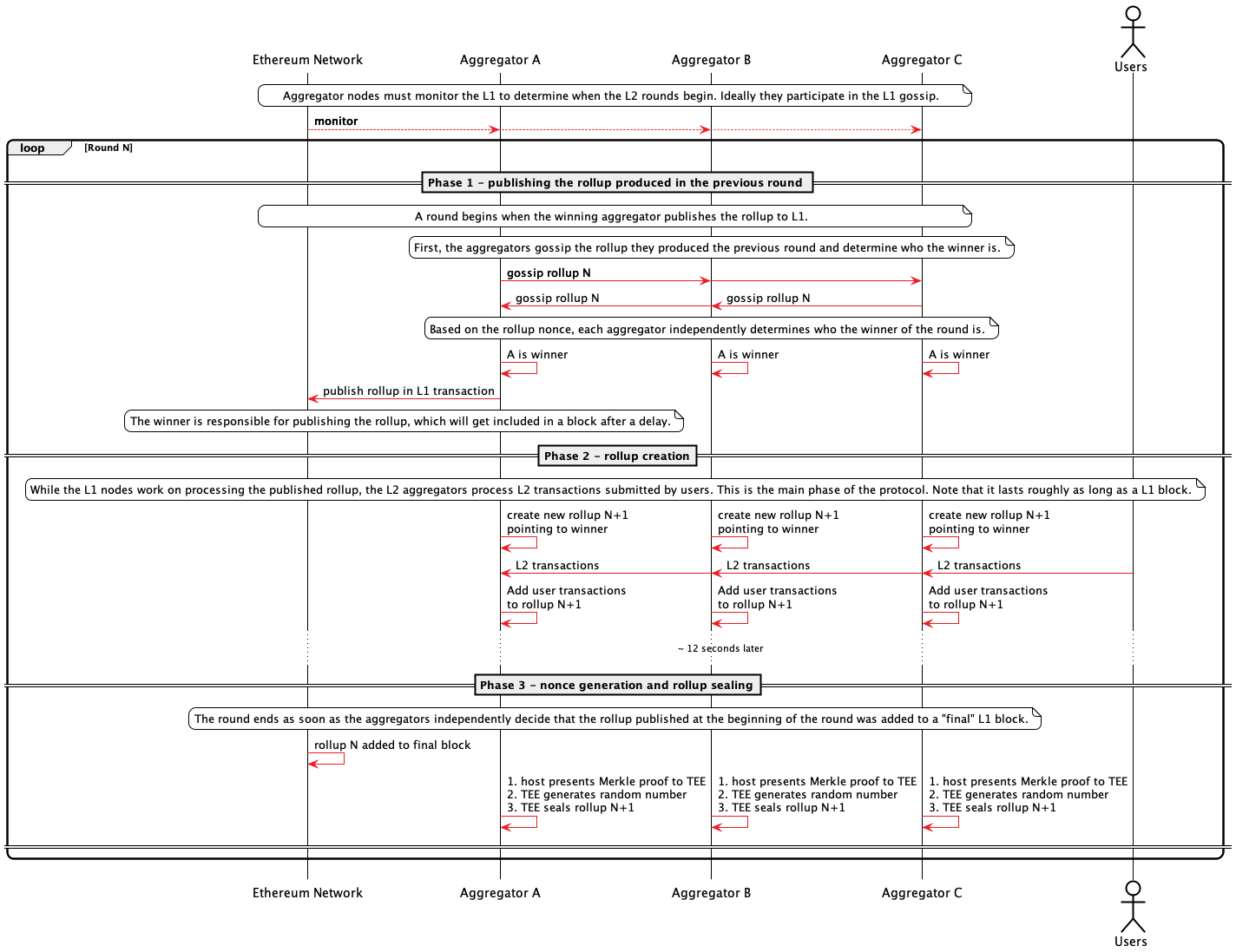 There are six elements that define a rollup :

The following diagram depicts these elements:

Note that the value of L1_Proof_Height can only be lower than L1_Block_Height.

The POBI protocol allows any Aggregator to publish rollups to the Management Contract, so short-lived forks are a normal part of the protocol. The forks cannot be long-living during normal functioning because the ObscuroVM running inside the TEE of every node deterministically selects one of the forks as the canonical chain and only appends a rollup on top of that.

Because the logic is identical and attested on all nodes and the TEEs receive all the relevant content of the L1 blocks (which means they process the same input data), there cannot be any competing forks more than one rollup deep unless there is a hack.

The rules for the canonical chain are the following:

Using the notation, for the same Rollup_Height, the rollup on the canonical chain is the one with:

Given that the nonce is a random number with sufficient entropy, we assume there cannot be a collision at this point during normal functioning. In the situation where it happens, the rollup on the canonical chain will be the one with the lowest hash.

In phase 3 of the protocol, the TEE of each Aggregator generates a random nonce which determines the winner of the protocol. This introduces the possibility of gaming the system by restarting the TEE and generating multiple numbers.

The solution proposed by Obscuro is to introduce a timer in the constructor upon every startup of the enclave. A conventional timer, based on the clock of the computer, is not very effective since the host can game it. Instead, the enclave must calculate serially (on a single thread) a large enough number of SHA256 hashes, which it would not be able to do faster than an average block time even on powerful hardware.

This solution is effective since the code is attested and does not rely on any input from the host.

A node operator wanting to cheat would restart the enclave and quickly feed it the proof of inclusion, only for the enclave to process it after 15 seconds, which means the operator has already missed the time window for that rollup.

This built-in startup delay is also useful in preventing other real-time side-channel attacks, which could be used for MEV.

Compared to a typical L1 protocol, there is an additional complexity to consider. In an L1 like Bitcoin or Ethereum, once a node gossips a valid block, all the other nodes are incentivised to use it as a parent because they know everyone does that too. In an L2 decentralised protocol like POBI, there is an additional step: the publication of the rollup to L1, which can fail for multiple reasons. Furthermore, the incentive design must also consider the problem of front-running the actual rollup. For a rollup to be final, it has to be added to an L1 block, which is where an L1 miner or staker can attempt to claim the reward that rightfully belongs to a different L2 node.

Note that rollup finality will be covered extensively in the Obscuro - Ethereum interaction section.

The high-level goal is to keep the system functioning as smoothly as possible and resist random failures or malicious behaviour while not penalising Obscuro nodes for not being available. We believe that penalties for availability increase the barrier of entry, and thus make the system centralised over the long term.

Obscuro introduces the concept of claiming rewards independently of the actual canonical rollup chain. The great advantage is increased flexibility in aligning incentives at the cost of increased complexity. Rewards can be awarded in full, split between Aggregators or just enough to cover the cost of gas.

To achieve this, the protocol has to maintain a pool of tokens. Users will pay fees into this pool, while nodes will be paid from it. During bootstrapping, the protocol will have the ability to add newly minted tokens to the pool. Once the network picks up, the protocol will be able to burn excess tokens.

Note, that an important assumption is that the reward from publishing a rollup will never exceed twice the gas cost.

These are the Aggregator rewarding rules:

The following diagrams depict some of the rewarding rules: 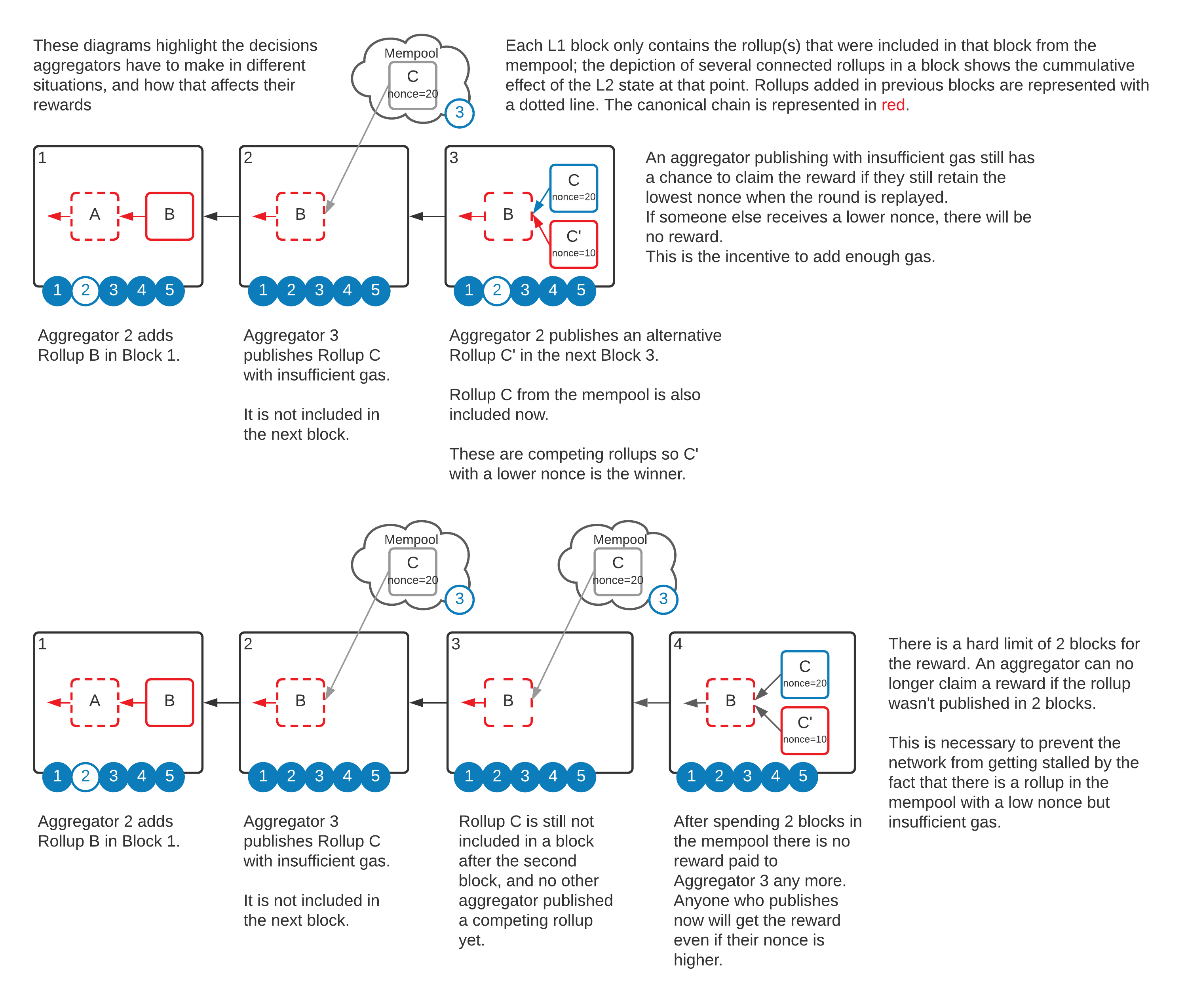 The following diagram depicts rules in the case of front-running: 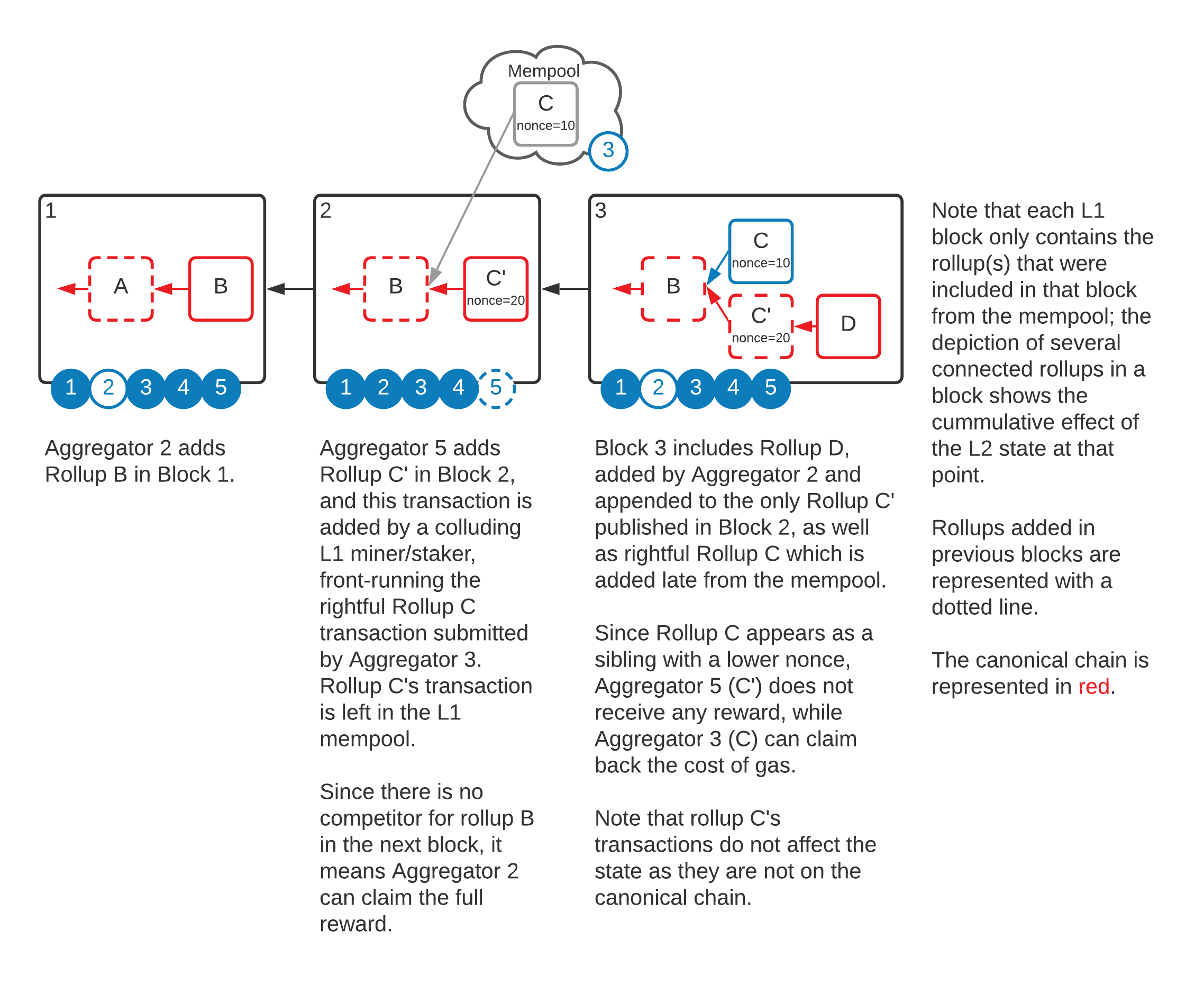 This is python-like pseudocode to calculate the rewards that can be claimed by an Aggregator for a Rollup_Height. Note that it is not comprehensive, and there may be many competing aggregators.

Note that these rules are subject to adjustment based on production observations. 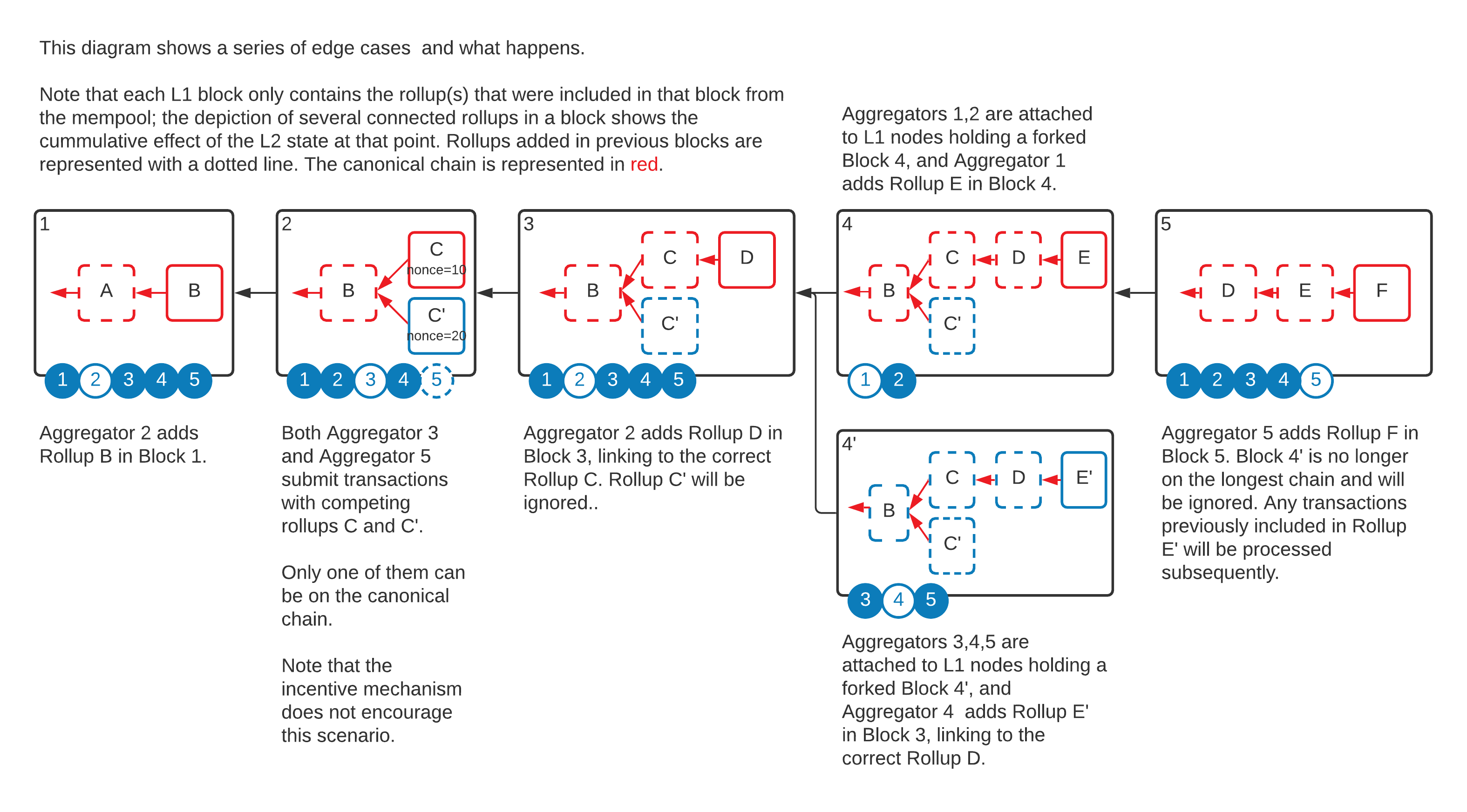