Obscuro is designed as an L2 protocol, where user activity is moved off-chain from the L1, and it follows the increasingly common rollup pattern to store transaction data on the L1 chain to achieve censorship-resistant data availability. This is leading to proposals to reduce calldata storage costs on Ethereum. Most rollup implementations exist to provide scalability for L1 networks, but the prime objective of Obscuro is to provide confidentiality. The rollups contain the entire encrypted transaction data.

L2 networks have a unidirectional dependency on an L1 network: while the L2 network relies on the L1 network to provide an immutable and public record of transaction data and to provide censorship resistance, liveness and availability, the L1 network is unaware of any individual L2 network. L2 submitted rollups are just normal L1 transactions.

The following diagram shows the interactions between the two decentralised networks, Ethereum (L1) and Obscuro (L2): Obscuro is formed of Nodes called Aggregators, who compete to process user transactions, roll them up, and submit for inclusion in Ethereum blocks. Ethereum, through its protocol, leverages its own nodes to produce Ethereum blocks containing, amongst other things, the submitted Obscuro rollups. 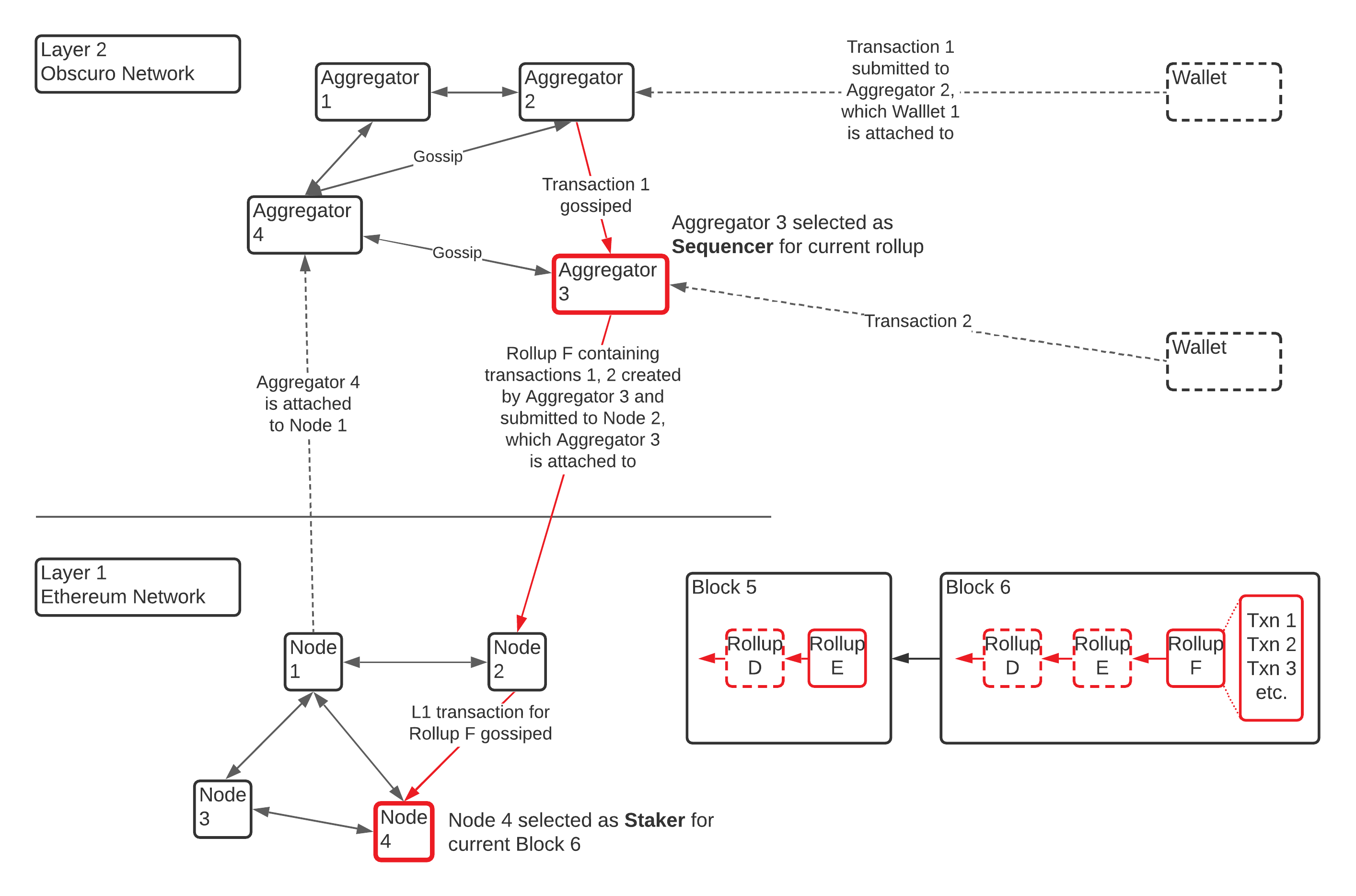 On the bottom right, this diagram also depicts the state of a simple rollup chain as it is found in the sequential L1 blocks.

On the L1 network there are several regular Ethereum contracts, referred to as Management Contracts.

Note: the L1 design is covered in more detail in L1 Contracts.

This contract is the gatekeeper for the protocol. Any Obscuro node wishing to join the network will have to interact with this contract and prove it is valid. This contract will also manage the TEE attestation requirements and will be able to verify attestation reports.

It will also manage the stake of the participants able to submit rollups known as Aggregators.

Note: The stake is a piece of the game-theory puzzle that ensures that Obscuro participants have the right incentives to follow the protocol.

This module accepts rollups submitted by L2 nodes and includes them in the rollup-chain structure. It works together with the bridge in processing withdrawal requests from users.

This contract is very important for the solution’s security since it will protect all liquidity deposited by Ethereum end-users, and reflected in the confidential Obscuro ledger.

The goal of the L2 design is to create a fair, permissionless, and decentralised network of nodes with valid TEEs who cannot see the transactions they are processing while collaborating to manage a ledger stored as rollups in the L1. The ledger should preserve its integrity even in the face of catastrophic TEE hacks.

All Obscuro nodes have to go through the attestation process with the Network Management contract before receiving the shared secret and participating.

Note: the shared secret is covered in the cryptography section.

There are two categories of nodes in the Obscuro network:

Aggregators are the Obscuro nodes whose TEEs are in possession of the shared secret and can submit rollups to the L1. To gain this privilege, these nodes must pledge a stake.

Aggregators have the following functions:

Note that logically a node is split into two main sections:

These are the steps to become an Aggregator.

Note: Each Aggregator needs an ETH balance on the L1 to pay for the submission of the rollup.

The steps to register as an Aggregator are shown in the following diagram:

Verifiers are TEE-equiped Obscuro nodes in possession of the shared secret and play a strong role in consensus security. They are configured differently and have not pledged the stake nor are they part of the Aggregator gossip network. To receive the L2 transactions, they monitor the L1 network and calculate the state based on the rollups submitted there.

End users can interact with either Aggregators or Verifiers to receive events on submitted transactions or query their accounts’ balance. Anyone can become a Verifier with minimal cost if they have compatible hardware.

Allowing these two categories lowers the bar for participation, thus making the network more robust and decentralised since more independent parties guard the shared secret and can react in the face of an attack.

The Management Contract implements a blockchain-like data structure to store the rollups. Each rollup points to a parent rollup, and at any time there can be multiple competing sibling rollups. Similar to L1 blockchains, it is the responsibility of the individual L2 nodes to decide which sibling is valid. The difference is that un-hacked nodes are running the same code and thus are not able to build upon an invalid rollup, or even to build on different rollups.

The diagram below depicts an L1 blockchain (in black). Each block contains a snapshot of the state of the Obscuro rollup chain (in Red). In this example, there are 5 Obscuro nodes.

Note that forks are possible on both layers, and it is the responsibility of the Obscuro nodes to navigate and choose the most likely L1 block. The following diagram depicts a couple of complex scenarios, where firstly an extra Aggregator publishes an additional rollup to a block, and secondly the L1 chain forks.