Obscuro is a confidential extension to Ethereum, and thus assets have to move freely between the two networks.

The user deposits supported ERC tokens into the well-known address of the Bridge contract, and once the transaction is successfully added to a block, the Obscuro-enabled wallet automatically creates an L2 transaction, including proof of the L1 transaction. The exact amount is credited with wrapped tokens on the user’s account on Obscuro.

The fact that the finality of L1 transactions is probabilistic makes crediting the L2 account not straightforward. Most solutions solve this problem by waiting for a confirmation period before crediting the account. Obscuro takes a different approach and introduces a dependency mechanism between the L2 rollup and the L1 blocks.

The interaction is shown in the following diagram: 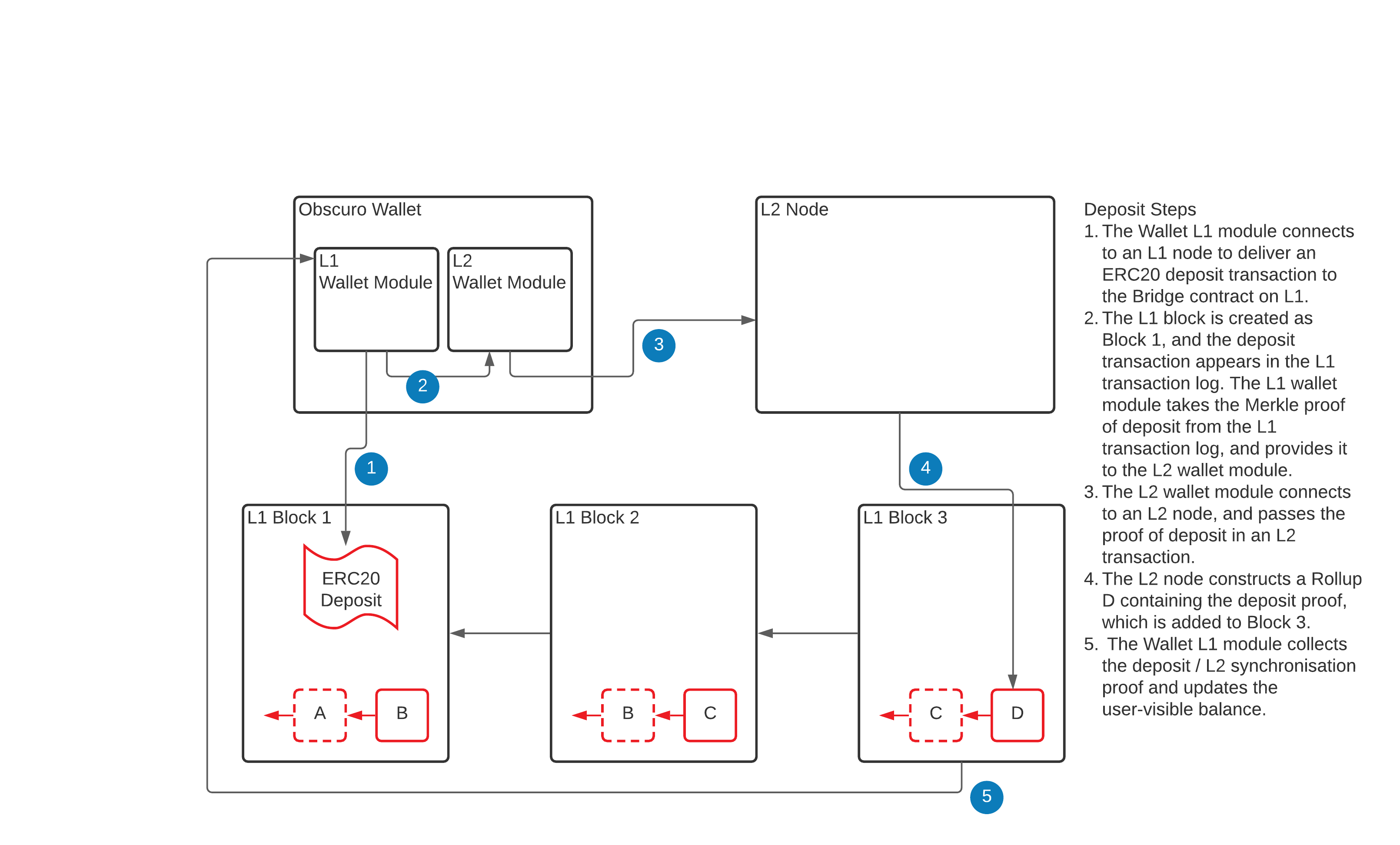 Note: The deposit L2 transaction cannot be fully encrypted because the Aggregator has to decide whether to include it in the current rollup based on the chances of the L1 block it depends on being final.

The high-level requirement for the withdrawal function is simple: allow Obscuro users to move assets back into the Ethereum network. The problem is that this is where the most significant threat against such a solution lies because there might be a large amount of locked value.

The challenge is to implement this functionality in a decentralised way by defining a protocol and economic incentives.

Due to the sensitivity of this function, many sidechains and L2 solutions rely on multi-signature technology to control the release of funds. Optimistic Rollups rely on a challenge mechanism during a long waiting period before releasing funds, powered by economic incentives.

Obscuro uses TEE technology, but it cannot leverage it for this aspect because of our threat model. The Bridge Contract could release funds based on a signature from an attested TEE if it were invulnerable, but since that is not the case, the solution is to use economic incentives on top of the POBI protocol.

The general rule is that withdrawals can be processed only when a rollup is final. This means this is the protocol for the finality of the Obscuro chain relative to the Ethereum chain.

In the usual case, a rollup from the canonical chain (see POBI protocol) is final if a standard number of blocks corresponding to a period of 1 day has passed from the Ethereum block where it was published.

Assuming the period chosen at rule #1 is enough, the only possible write attack performed by an actor that could hack the TEE manifests as multiple parallel forks at least two rollups deep. This is because all valid TEEs run the same attested code that chooses the same canonical chain from the rollups published in the L1 block presented as proof. If the Management Contract notices multiple forks, the rule is that finality is suspended on all forks, thus, withdrawals are suspended. Likewise, if one of the forks becomes inactive, the rule is that all rollups on the alive fork become final once a standard period of 1 day has passed from the last L1 block that contained a rollup published on the inactive branch.

Rule 3 - addressing the DoS on finality

Since rule #2 transforms any attack into a DoS attack, the protocol has some mechanisms to keep user experience satisfactory even in the extreme case of a TEE hack.

The above rules will, in practice, prevent this type of attack, and if it happens, offer a practical solution for users. In addition, the protocol has yet another backstop to address the extreme case of a very persistent attacker.

The network governance model allows any user to trigger the forced finality procedure by staking or voting on one of the competing rollup chains. The minimum stake is a percentage of the amounts being withdrawn on that branch, set through governance. Backers of the other chain are obliged to stake a similar or higher value to compete. The decision process is run as an auction, where the party that loses also loses their bids. When concluded, all rollups on that chain are considered final, and withdrawals are executed.

The Bridge contract keeps track of these requests and executes them at different times, based on the finality status of that rollup.

The withdrawal process is indicated in the following diagram: 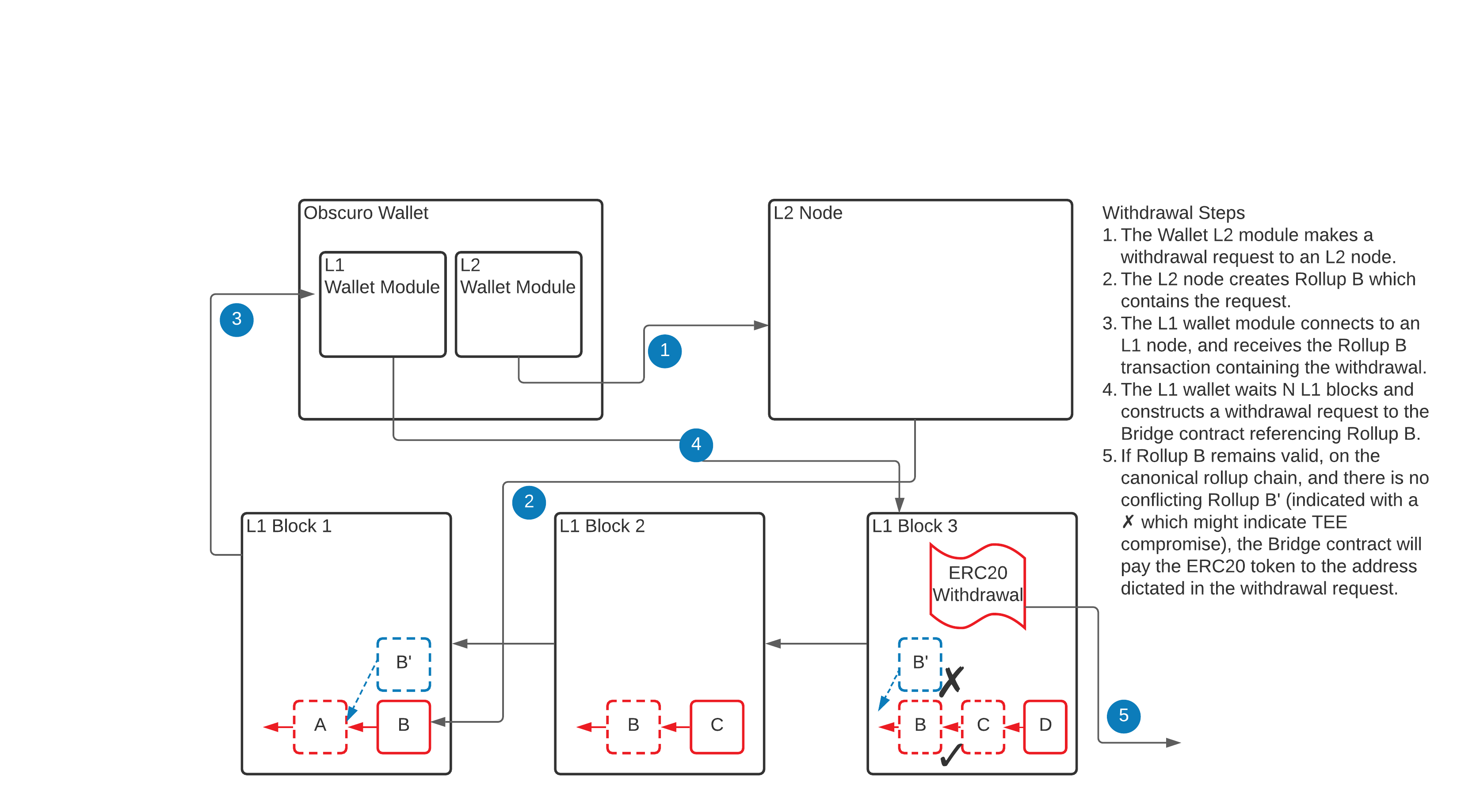 Ethererum application developers can use a confidential L2 like Obscuro for some jobs that are not possible otherwise.

For example, an L1 smart contract organises a fair lottery that needs a reliable random number generator that the miners cannot game.

Another example is publishing the result of a poker game played inside Obscuro, which the L1 contract can use to make a payment or update the tournament results.

The challenge for achieving this functionality is that the data originating in L2 has to be final. Luckily Obscuro has this mechanism already in place for processing withdrawals. Applications running inside Obscuro can emit special types of events called Public Events, which the OVM will add in plaintext into a dedicated data structure in the rollup. The _Rollup Contract _ first processes the rollup, and then once they reach finality, it exposes these events to external contracts.

Note: The fair lottery can be implemented in two steps to avoid any possible influence. The implementation can use the submarine technique and first publish the hash of that number in an event, and a few blocks later publish the actual number in a different event.